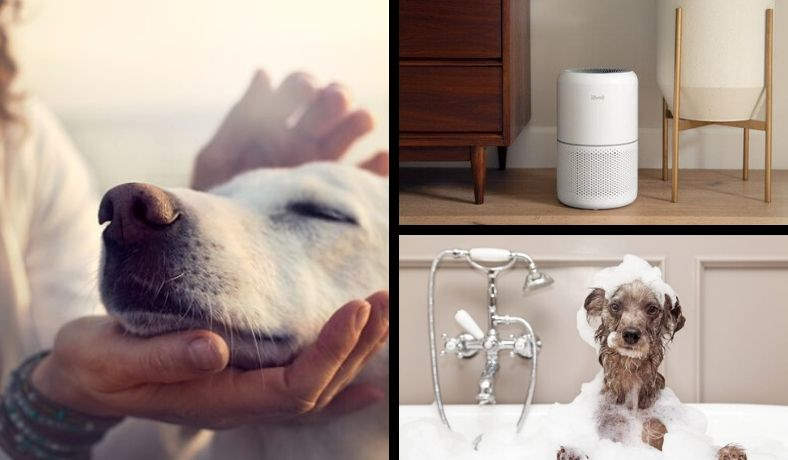 As a dog lover myself, I understand one of the little gripes we have about them: the smell. Dogs naturally produce odors and for some people it’s a bother.

Maybe you’ve been thinking about buying an air purifier to help. If so, you’re probably wondering “Will air purifiers help with dog smell?”

I’ll share more with you about where dog odors come from and how air purifiers can – and can’t – help.

Where do dog odors come from? 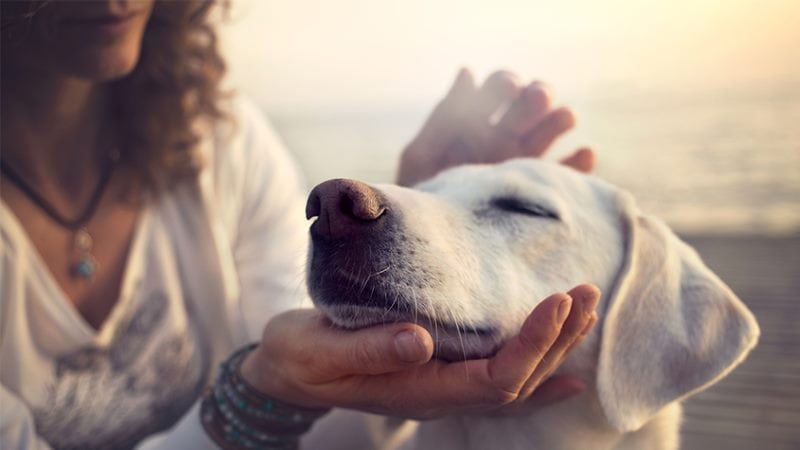 Dogs naturally produce a few smells. Some of these mark their territory as well as help to identify them among other dogs. They naturally produce odors near their ear and paw pads. However, they don’t sweat on areas covered with fur.

It’s suspected that although they do have sweat glands for every hair follicle which do not produce perspiration. Instead, they may produce pheromones or some similar type of chemical secretion for signaling of some sort with other dogs.

Additionally, they have glands in the ears that can produce a slight odor. However, some of the most noticeable odor comes from their paws and nose which, when moist, can possibly produce a noticeable odor as well.

More places for smells to hide

Smelly ears may often be a sign of infection too, although a slightly “yeasty” odor can sometimes be noticed near their ears due to the natural organisms present in their ear wax.

A dog’s dander is actually microscopic skin cells shed and is one of the most common causes of pet allergies.

And of course, don’t forget your pet naturally brings in more odors when they have been outdoors and exposed to bacterial-containing matter and other matter such as grass, dirt, and plant waste by-products. 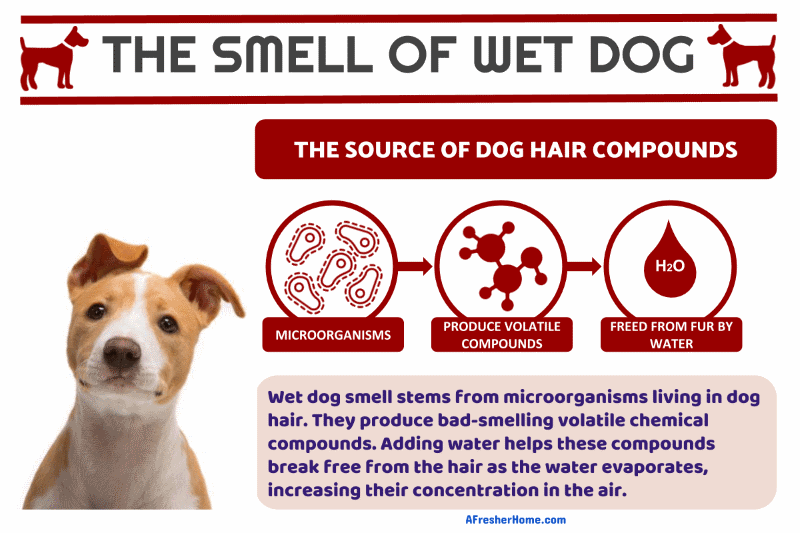 The “wet dog” smell actually has a scientific explanation that is very detailed. Basically, dogs have some organic chemical sources that are “amplified” and released when their hair is wet. This isn’t an everyday occurrence but it certainly explains one of the most well-known sources of odors from dogs.

Dog odors from other sources

Dogs (especially breeds with long hair) that aren’t cleaned well are prone to trapping dirt and other substances in their fur. They’re also prone to gather and collect organic material which can later lead to producing odors later.

Some are simply bad-smelling substances on their own (like garbage and other materials mischievous dogs get into).

Skin diseases have been known to increase the production of sweat which can radiate a smell that’s like a musty, damp odor. Dog breeds with deep skin folds are eligible for trapping bacterial substances or having an increased growth of yeast which again can present an unwanted smell.

Conditions in a dog’s mouth like ulcers and sources of infection can promote bacteria which, much like humans, causes bad breath and an offensive odor.

A few other sources of smells from dogs exist, too:

How an air purifier can reduce dog smells 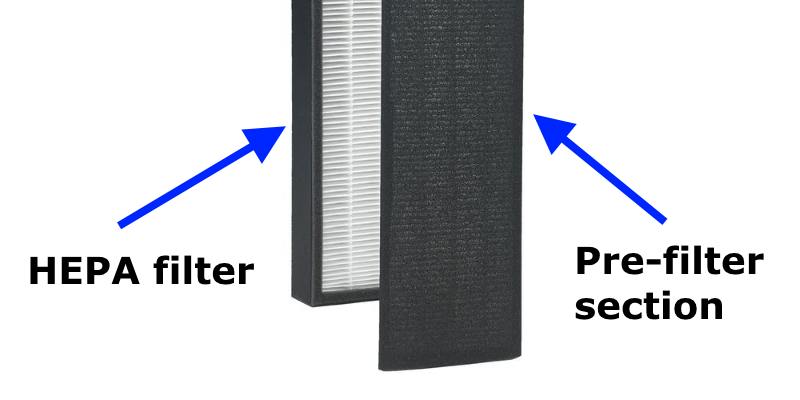 The filter sections of a typical air purifier. For dog odors, the most important is the pre-filter with an active carbon filter included. This traps odors and other lingering substances in the air. It can also trap dog hair that’s airborne. The HEPA filter section removes finer problem-causing particles like pet dander, dust mite by-products, and much more. Shown is a 3-in-1 filter. The 1st and 2nd stages are combined in the pre-filter in this case.

Air purifiers work by trapping microscopic particles. Removing allergens and foreign matter to sizes even less than 1/1,000,000 of a meter are possible in the case of a true High-Efficiency Particulate Air (HEPA) filter. A good air purifier can readily and efficiently remove 99.97% of all dog dander in the air.

This, of course, helps with smells as well as allergies due to dog hair and dander, but what about the other odor sources I mentioned above?

Many purifiers use what is sometimes called a 3-stage filter. In this case, the 1st stage is a more coarse filter for first removing larger elements from the air (in this case dog hair) followed by a carbon filter.

These are used in addition to the HEPA filter section and the remaining microscopic particulates like dust mites, airborne microbes, dog dander, and other particulates are permanently removed from the air.

A carbon filter is important and quite helpful for permanently removing odors that linger as they’re caused by organic and other chemical substances.

Other things you’ll need to do

As an air purifier can definitely help but cannot address all sources of dog odor, if you want to really reduce them you should consider picking up an odor-reducing shampoo.

They’re very effective at cleaning your pets and getting rid of those nasty smells. 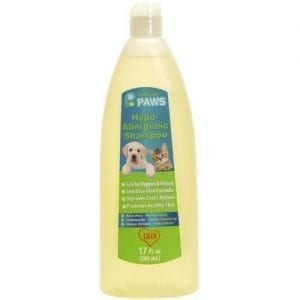 A No products found. can remove odor-causing bacteria & organic matter. For the best effect when trying to eliminate dog odors, you’ll need to bathe your dogs occasionally and use a high-quality air purifier.