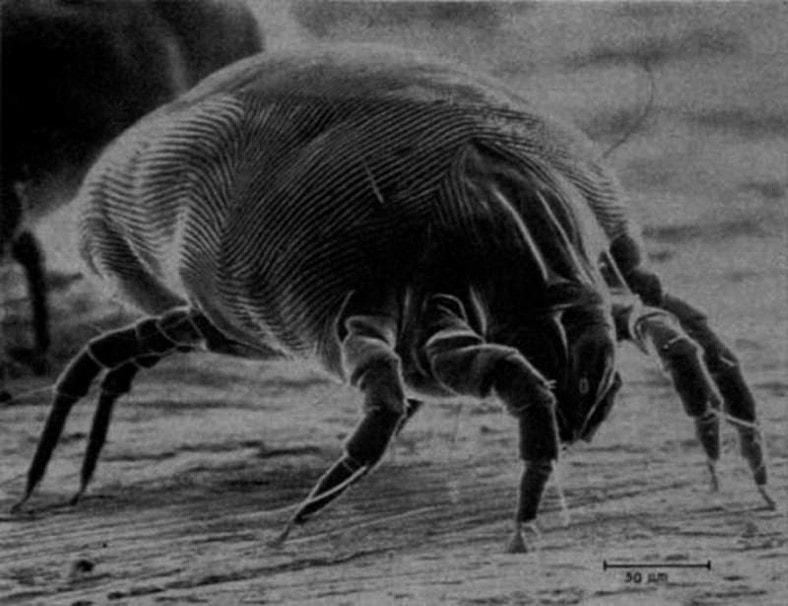 One of the most common causes of allergies, dust mites are a big problem for many people.

If you’re seeking relief there are a number of options available and some include natural remedies that can treat surfaces like your bed and fabric. However, there’s still the problem of lingering airborne particles they produce.

Do air purifiers help with dust mites? I have some great news, and I’ll explain more in detail below.

Understanding dust mites and the allergens they produce 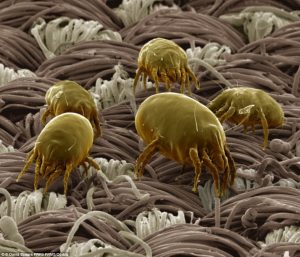 A microscopic image of dust mites on fabric. Dust mites get into furniture and materials where humans and pets live – especially beds. You’ll have to take extra steps to get rid of them, but an air purifier can help. They’re great for fighting the nasty allergy-causing particles they release into your home’s environment.

What are dust mites?

Measuring only about 1/4 to 1/3 of a millimeter, they’re far too small to see with without a microscope.

Mites resemble translucent or almost white bugs. As they have 8 legs they somewhat resemble spiders and are classified not as insects but as arthropods.

One of the reasons they thrive so well in homes is because of indoor temperatures. They thrive at ranges of about 68 to 77 degrees Fahrenheit (20-25 degrees Celsius), and especially humidity levels of around 70-80%.

Mainly they feed on the tiny fragments of skin that humans and your pets produce daily. Not surprisingly these skin particles end up between threads and deep within layers in furniture, your bed, carpets, and even stuffed toys and clothing.

Dust mite allergens and the problems they cause 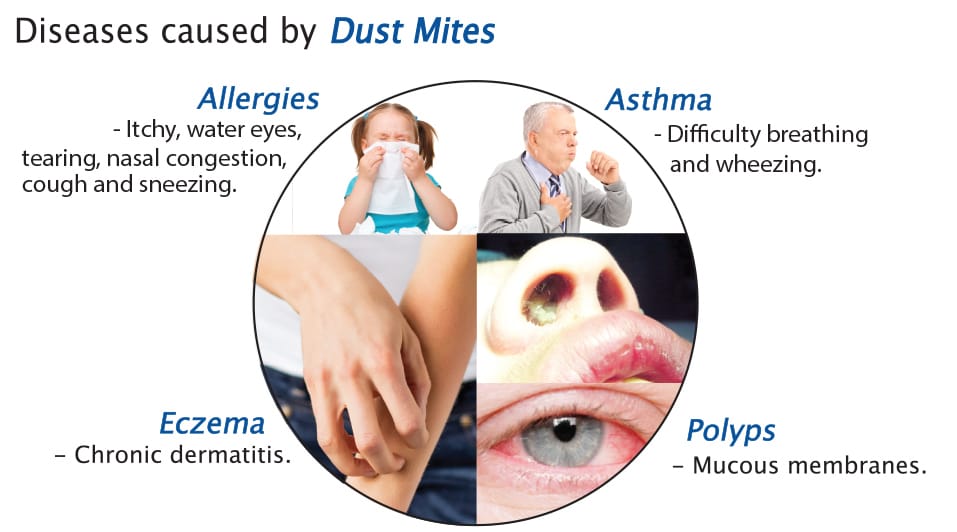 It’s the waste products as well as the body parts of the mites that cause an allergic reaction for many humans.

As they die their dead bodies and waste are left behind. When clothing, furniture, and bedding are disturbed these leftover particulates can become airborne where they can cause skin, nose, and other symptoms when they land on your skin – and even enter your breathing passageways!

Why dealing with dust mites allergies is hard

Obviously, due to the tiny size, they’re hard to deal with and many things won’t have any effect, either.

The main difficulty lies in the microscopic sizes of the dust mite body and fecal matter which is the primary allergen source. Studies have shown sizes ranging from 5 to 40 micrometers (or sometimes called “microns”). 1 micron = 1/100,000 meter.

No sprays, deodorizers, or fans can help with that – you’ll always have that problem until they’re dealt with properly.

The other is that even if you manage to kill the dust mite population, allergens still will remain and will continue to cause allergies in people in the home.

Without question, the best solution is to completely remove dust mite allergens around you.

How an air purifier can help

Air purifiers like the GermGuardian AC4825 work by pulling air through a series of filter sections using a small fan. As the air in a room circulates they reduce dust mite problems by filtering and trapping these mite allergens.

In order to do so a filter capable of trapping particles as small as 5 as microns mentioned earlier is necessary. The industry standard is the High-Efficiency Particulate Air (HEPA) filter. These are a standardized type of filter which must meet the following requirements:

This means if over a period of time that air containing 10,000 particles and substances moves into the filter only 3 will escape! An excellent amount of filtration.

Why you need a HEPA filter purifier

A true HEPA filter must meet these requirements – hence as you can see it is critical to have one that meets these criteria in order to reduce your allergy suffering.

Note also that most typically are also bundled with or attached to 2 other filter sections: one for filter larger elements (like air, larger dust particles, and so on) and a carbon filter with traps chemical substances like odor-causing chemicals or organic chemical matter.

Dust mite allergens will be no problem in this case.

Owners of air purifiers have reported relief and noticeably better breathing air in their home or other rooms after using on.

Note: It’s critical to replace the filter after some time to restore the filtering ability once it’s used up. That’s especially true after a large amount of dust mite matter has been captured.