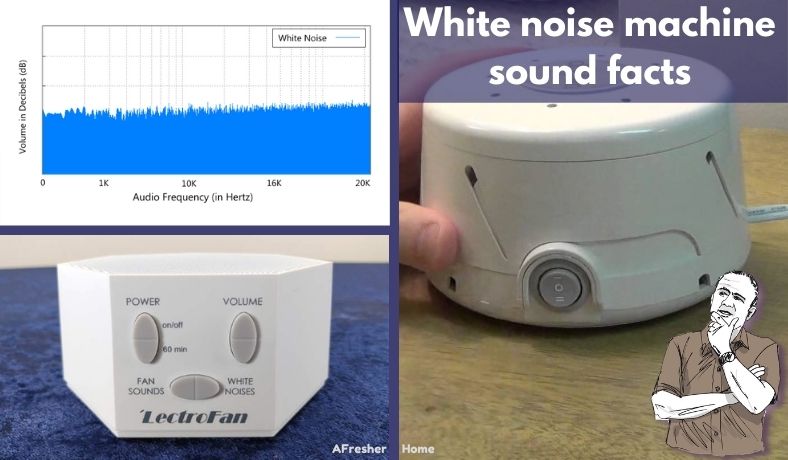 White noise can really help your quality of life in a lot of ways: privacy, better rest or sleep, studying, and even more. But what does a white noise machine sound like?

Great news! I’ll let you hear for yourself!

This article is part of the white noise machine main page.

What does a white noise machine sound like? (Video sound samples)

Like other brands or models, the LectroFan provides both nature sounds and a variety of white noise options to pick from. These are:

In this video, I start with the default (first) sound, brown noise. I then go through the other 9 sounds and loop back to the 1st one again by using the noise sound button to show you how it works.

You can hear the short “whoop” sound after the 10th noise sound is played. That’s an indicator to let you know it’s starting back over at sound #1.

In this recording, you’ll hear all 10 simulated electric fan sounds the unit provides. I start with the first (large fan) and go through the remaining additional 9 sounds before returning back to the first. 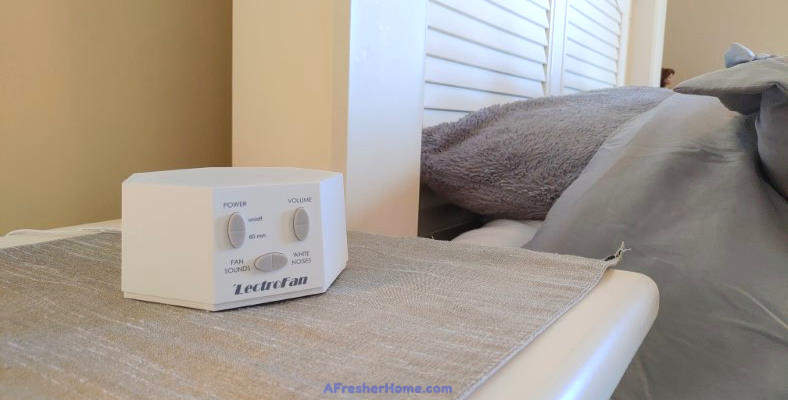 Simply put, white noise machines are devices designed to mask, or cover up, sounds we would otherwise hear. They generate “white noise” patterns (a general name, sometimes used incorrectly) to make this possible.

If the volume of the sound you want to block is equal to or less than the volume of the white noise, you’ll be prevented from hearing them. This makes it possible to read or study better, sleep better, concentrate on relaxing, or to keep your privacy in an office setting or bathroom.

These are just some examples of the most common uses for them.

Sound machines are used for a wide range of circumstances to block sounds, avoid distractions, and create a soothing and distraction-free environment.

Some of the most helpful white noise machine uses are:

How do white noise machines work? 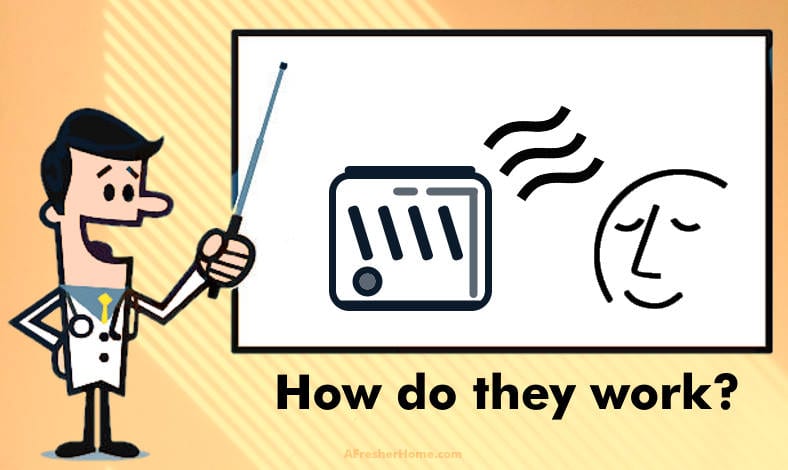 White noise machines (also called sound or sleep machines sometimes) come in two types based on how they work:

Both do the same thing generally but have some big differences in how they go about as you’ll see. 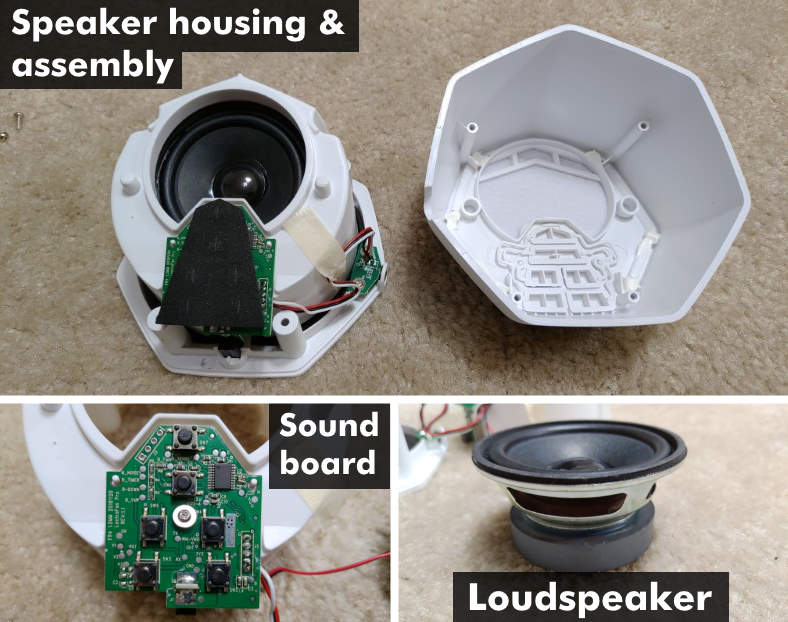 Electronic models use integrated circuit chips (ICs) to create noise patterns either generated as a continuous pattern or stored as an audio file much like .MP3 music. Predetermined sounds are generated and adjustable volume control is standard.

Some models have more options than others, offering special audio sounds like those of nature and rain, electric fans, and other versions of white noise to best suit your taste.

This type uses an older type of noise-generating technology. They’re simpler to use, too. Although less popular now they’re still widely used and a good choice for many people.

Electromechanical white noise machines use an electric motor to spin a small fan creating a constant soft airflow that moves through the small vents, producing a soft tone. Some allow for volume and some sound tone adjustment as well, although they’re not anywhere as near as versatile as electronic models.

On the other hand, while they don’t have the options that solid-state models do, they’re super easy to use and still preferred by some people because of their sound. 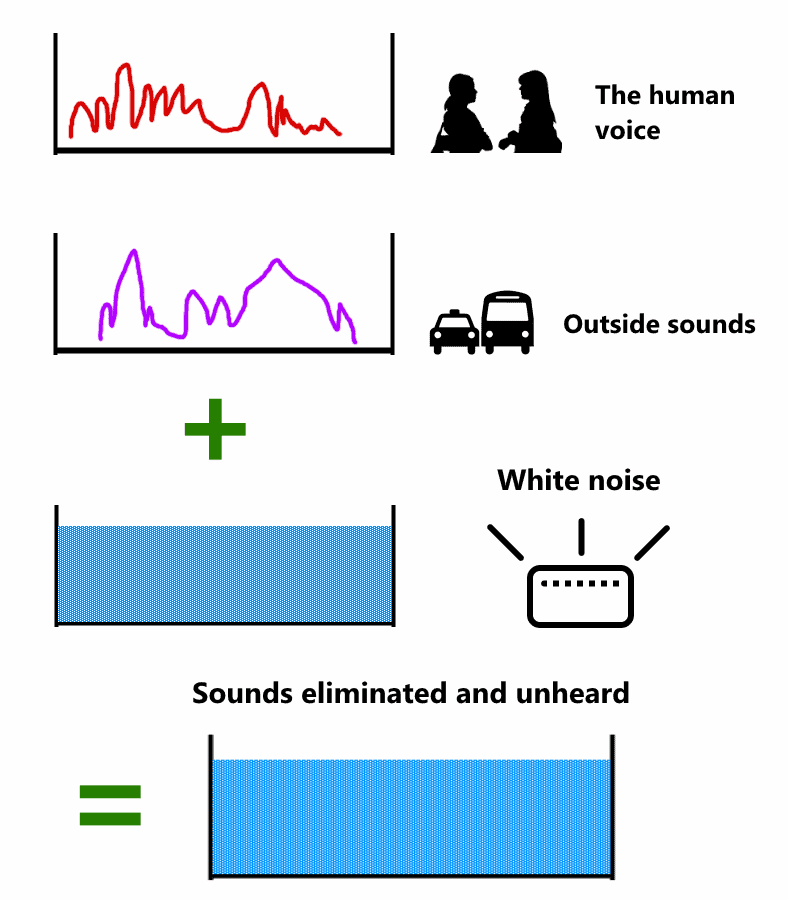 White noise machines help by creating a range of sounds that “mask”, or cover up, distracting sounds you normally can hear.

White noise machines produce a fairly wide range of sound frequencies that spreads across the range of many common sounds that bother us. As long as the volume of any inside or outside sound is equal to or less than the volume of noise made by the machine it can be effectively blocked and go unnoticed.

With a few exceptions, nearly all nearby sounds with low or moderate volume – traffic, conversations, coworkers – all the frequencies that we can hear can be blocked.

Sound is mostly about your brain

Our brains can’t process a lot of audio information at once. Ever been in a situation where everyone’s talking at the same time? It’s almost impossible to pick out any one person speaking because it’s all mixed together.

That’s the idea behind sound machines & white noise: The audio frequencies we hear are masked by white noise and we don’t hear it. Whether it’s dogs barking, the radio or TV, or your neighbor’s conversation in a nearby apartment, it all works the same way.

Because our brains can’t separate sounds that arrive at our ears mixed together, it’s as if we never heard them. Sounds masked by white noise are essentially blocked and disappear since we can’t tell they’re there anymore.

What is white noise? What are pink and brown noise? 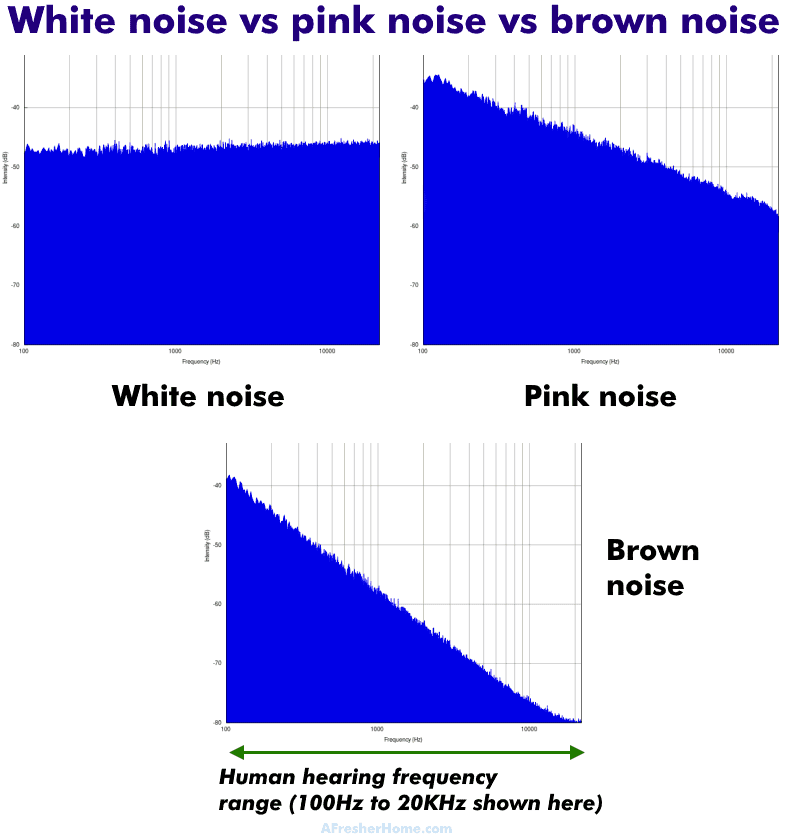 Shown: white noise vs pink noise vs brown noise. Each noise “color” has a particular characteristic based on the amplitude of the frequencies that make it up over the range of human hearing.

In the science and audio world, some types of useful and commonly used sound patterns are referred to by a name that’s a color. White noise, pink noise, and brown noise are some of the most common in fact.

An example of the “white noise” a sound machine creates 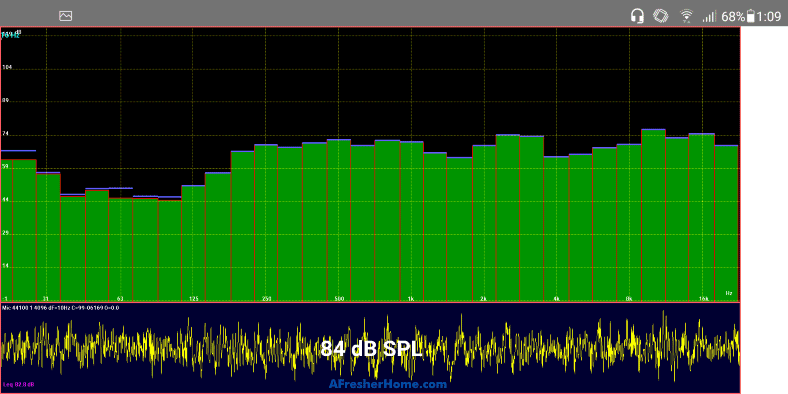 Using a test microphone and a real-time analyzer (RTA), I measured the frequency sound response output of a white noise machine set to its “white noise” option. As you can see, it’s not a perfectly flat output and isn’t technically white noise in fact.

In the audio spectrum analyzer snapshot I’ve provided above you can see an example of some things I’ve mentioned. Above, it’s easy to see that this white noise machine, when set to its “white noise” option, isn’t actually real white noise. It’s somewhat close, but when listening to one in real life you’ll notice the higher frequencies are a bit “soft” and muted.

One reason for this is that digital white noise machines use a signal speaker with a limited sound performance range. Also, the goal isn’t to create real white noise – it’s to create a broad pattern of sound that can mask the range of sound our ears can hear. In that respect they can work pretty well!

Likewise, non-digital (electromechanical) models naturally have a sound “roll off” due to how they work, such as how the sound pattern produced by a fan and electric motor doesn’t have harsh upper-end output.

How loud should a white noise machine be? 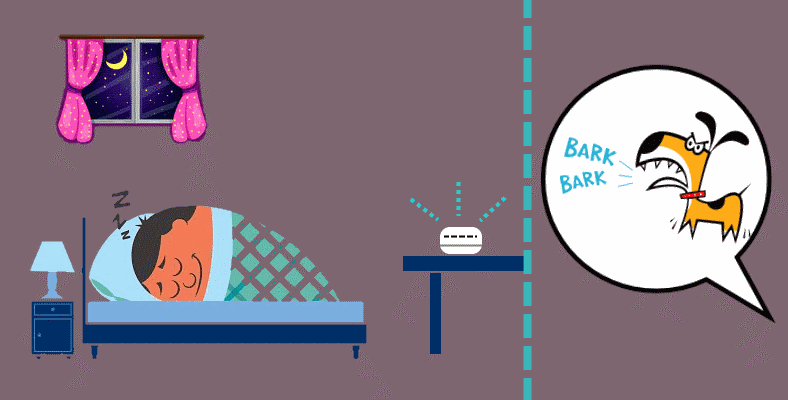 The volume you need for a white noise machine depends on the volume of the sound you’re wanting to block out. It’s important to shop carefully as while some models have a fairly good amount of volume you can use (say around 100dB or so, which is fairly good) others can be a very different story!

Generally speaking, I recommend at least 80dB volume available but more is definitely better. Ideally, you’ll never need more than some average listening level like 60dB-70dB, but it’s important sometimes to have more on tap.

Here’s another important thing to know: not all manufacturers specify the volume a white noise machine is capable of. In that case it’s helpful to know:

Before spending the money I’d recommend carefully checking buyer reviews in case you find complaints about insufficient volume. It’s not a typical problem for most people but if you have ever lived near someone yelling, playing loud music, or some such bother you know how bad it can be!