Do air fryers save on electric bills? And how much electricity does an air fryer use?

I’ll cover this and much more, too:

Read on to see all the great facts inside!

This article is part of the air fryer main page.

How much electricity does an air fryer use? 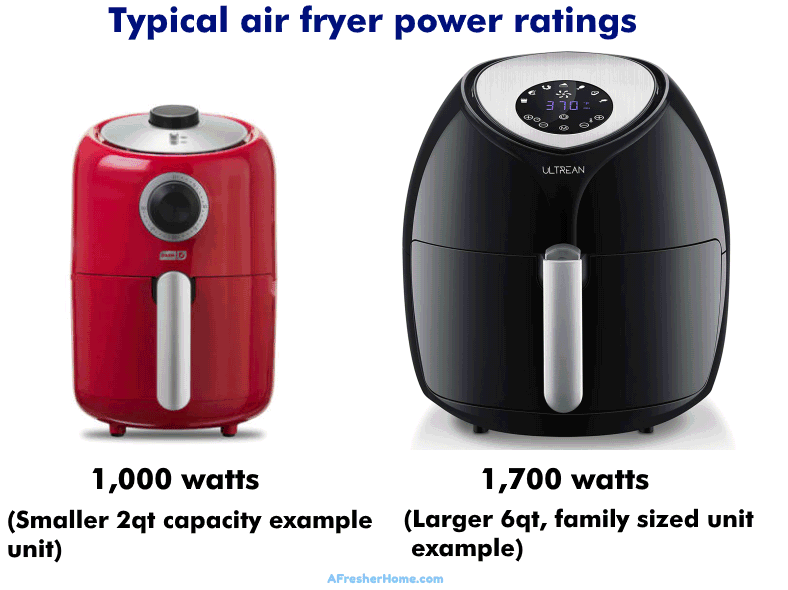 Typical Air fryers, like the ones shown here, are nearly always one of several standard power use ratings based on their size & food cooking capacity. Small units tend to be 1,000W while larger ones tend to most often be 1,700W.

The good news is that air fryers tend to be one of just a few electricity use ratings which is usually based on their size and food cooking capacity.

There are several reasons why, with the most important being that it takes more heat and therefore more electricity is needed to cook more food. 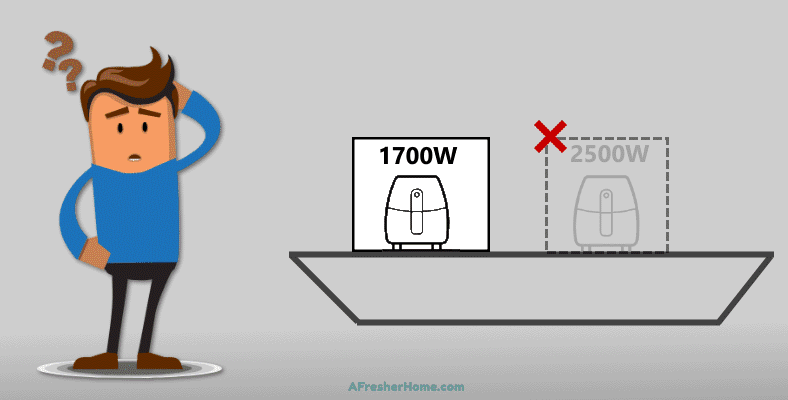 That’s because in the United States and some other countries that use 110V home power, the electrical circuits in the home are limited to supporting only about 1,800 watts maximum.

The electrical code followed in the construction of homes and buildings specifies that electrical outlets, circuit breakers, and wiring are rated for this.

Essentially, it’s for safety purposes. Let’s say you tried using an appliance of 2,00o watts. When attempting to draw full power (2,000 watts) the circuit breaker would trip, shutting down power to the outlet to prevent an overload condition.

Note: This is also why you can’t find small plug-in electric heaters bigger than 1,800 watts as well. The electrical system can’t support it, and products must follow the ratings of the National Electrical Code (NEC).

How many amps does an air fryer use?

Thanks to Ohm’s law, a basic formula for calculating power based on voltage and current, we can get an approximate number for how many amps different air fryers draw.

Note that American appliances use 110V while some other countries use 220V, so I’ll include both here in a handy chart.

These are approximate amps ratings, so they’re pretty close to what you’d measure with a Kill-A-Watt meter or test meter, for example.

As you can see, a typical higher-power 1,700W air fryer uses a bit over 15 amps while a smaller unit uses about 9 amps.

How an air fryer works 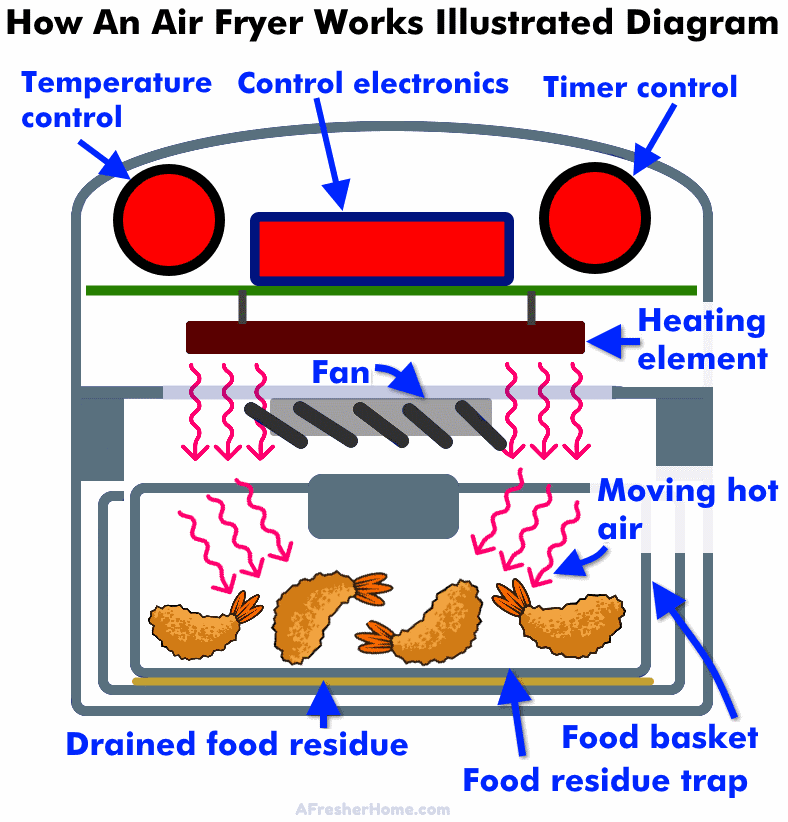 Illustrated diagram showing how an air fryer works and the main sections inside. Air fryers share a lot in common with traditional ovens which have a convection baking design. Food in an air fryer’s cooking basket is exposed to hot air forced onto it using a fan.

Air fryers don’t actually “fry” food. Hot air is forced onto the food in a way much like a convection oven.

Hot air is created by turning the electricity supplied into heat using a heating element. The hot air is blown over the food and moves, cooking the outside to crisp it as well as cooking the food internally.

Because they can cook food well and also crisp the outside similar to how a grease or shortening fryer works, they were given the name “air fryer”. It’s also because they’re more appealing if they’re seen as a healthy alternative to oil fryers.

A huge advantage of air fryers is that they do not need cooking oil that saturates the food as frying does.

The basic parts in an air fryer 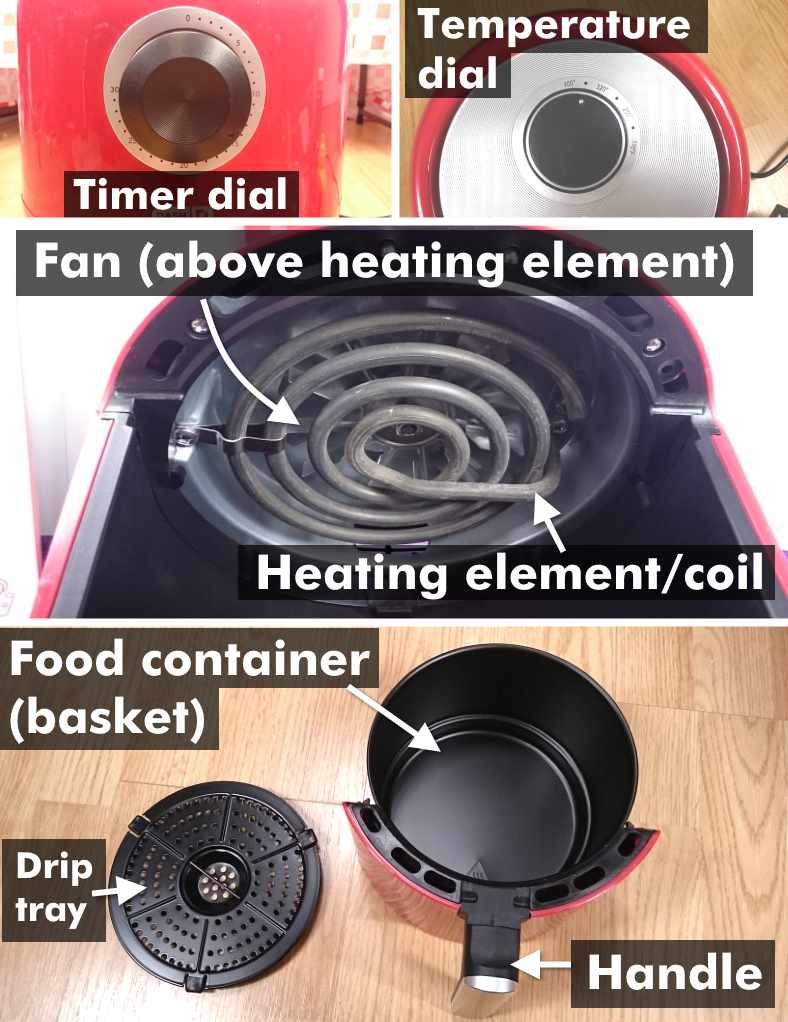 Air fryers come in a variety of styles but all have the same basic design: A heating element creates an intense source of hot air which is blown across the food using an electric fan. That’s how a convection oven works, but usually, with much more space it needs to heat.

Additionally, much like a traditional oven, they also have cooking time and temperature controls.

Other models have additional features, but the basic way they all work is essentially identical regardless of how fancy it may or may not be.

When we talk about appliances being “energy efficient”, usually we’re referring to how much work they get done or how much less energy they use than others.

In the case of air fryers, it’s important to remember that they’re essentially like little convection ovens. It takes a lot of electricity for a typical oven to cook food. Likewise, an air fryer also uses a lot – when compared to other appliances like a small microwave oven, for example.

To simplify, air fryers aren’t energy efficient in the strictest sense. They use 1,000W or more in most cases to cook food.

However, relative to large ovens which use 2 to 3 times that amount of electricity, yes they are more efficient. That being said, while there are other ways to do things like bake or toast bread, or cook food, air fryers typically deliver better results than other alternative ways of cooking that use less energy.

For example, I could use a small 900W microwave oven to reheat pizza. However, the results aren’t nearly as good as what an air fryer can give me! 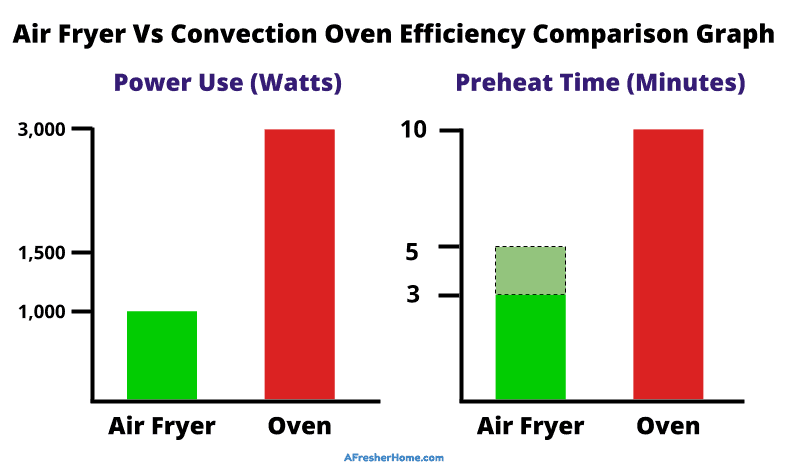 This graph compares the energy used by a typical air fryer vs a typical convection oven. Air fryers use much less electricity and also have a faster preheat time (about 3 to 5 minutes). Additionally, they use a lower maximum temperature than ovens. There’s much less air to heat since they’re smaller, making them great for saving energy & hassle.

An air fryer is very similar to a convection oven, with a few differences.

Here are some that stand out:

The main energy benefits of air fryers vs ovens

The end result is that you’ll use somewhere around 1/2 to 1/3 of the energy required by an oven if you use an air fryer instead. It’s also faster in many cases, I might add!

The drawback of course is that air fryers can’t do large batches of food like cookies, meal prepping, cooking very large meats, and some other common tasks.

What’s the best wattage for air fryer cooking and when shopping? 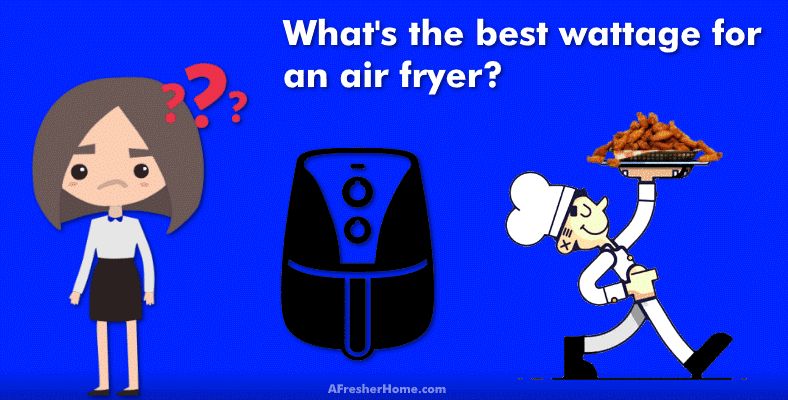 “What’s the best wattage air fryer?” – that’s a bit of a vague question, actually. It comes down to several things:

For small portions and servings for 1-2 people, a 1,000-watt air fryer is fine. However, for faster cooking, bigger portions, and especially for frozen thick foods like chicken wings, beef, and more I recommend a 1,700 watt model.

A higher-power air fryer can cook smaller portions faster if time is more important to you. Additionally, higher wattage air fryers generally have a larger basket for cooking more food as well.