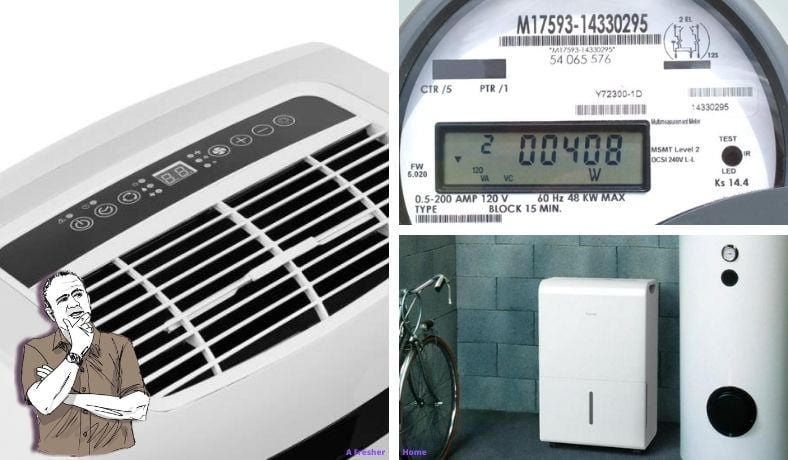 Sure, dehumidifiers are extremely helpful in how they can keep dampness under control as well as keep us comfortable. But are they energy hogs? How many amps does a dehumidifier use? And how many watts?

In this article I’ll cover this and more:

This article is part of the dehumidifier main page.

How many amps does a dehumidifier draw? 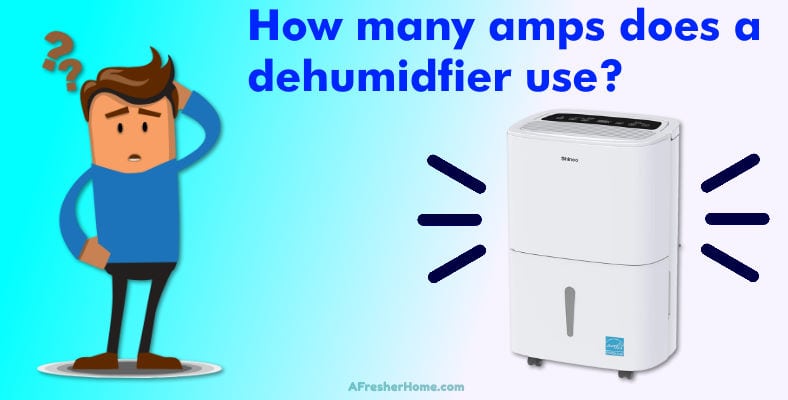 To keep things simple and easy to follow, I’ve put together a handy table for you. Here you’ll find the most common dehumidifier sizes and amps used for both 120V and 220V for those in other countries.

*Note: the larger number of each range is the high end of each type, with the dehumidifier running on high or full capacity.

Do dehumidifiers draw a lot of electricity? 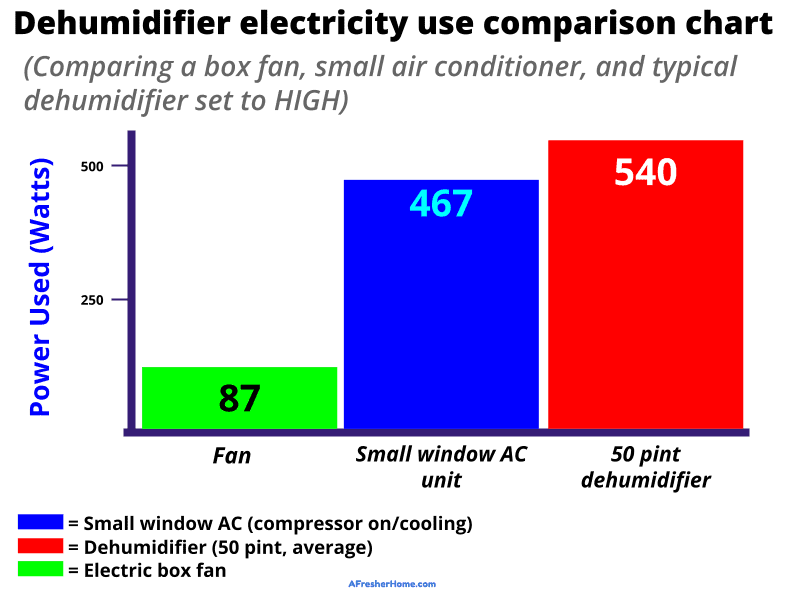 Shown: Graph comparing the energy used by a typical 50 pint dehumidifier vs a small window air conditioner or electric fan, each to the highest setting. Unsurprisingly, the AC uses nearly the same energy since they’re extremely similar in how they work!

Dehumidifiers use a moderate amount of energy: typically several hundred watts which is still much less than many electric heaters, air fryers, ovens, or other appliances. One interesting thing is how similar they are in power use to air conditioners.

A 50 pint/medium-size coverage may use between about 500 to 600W on average, as an example. Larger or smaller units will use more or less accordingly. Here I’ll cover some of the most common sizes.

How many amps does a 70 pint dehumidifier use? How much electricity?

70 pint dehumidifiers are very common and one of larger units you’ll find for sale. They use around 600W to 700W and as much as around 800W in some cases. The amps drawn are up to around 7.5 amps for 110V models on the high setting.

How much electricity does a 50 pint dehumidifier use?

50 pint dehumidifiers use close to 600W and nearly as much as some 70 pint models in some cases (up to around 700W or more). The amps drawn are about 3.2 to 7.2A depending on the setting and model.

Why do some dehumidifiers use more or less power?

The amount of power used varies by the design of the dehumidifier and how powerful they are.

Larger units can remove moisture from larger spaces so they require a bigger compressor and refrigeration system just as you might expect. Therefore larger models need more power to drive the motor that turns the compressor.

Air conditioning (AC) units also use a fan and refrigerant system circulated by a compressor as well which is why they’re very similar in how much electricity they require.

How much does it cost to run a dehumidifier?

We can use what we know about the amps or watts a dehumidifier draws (from above, for example) to estimate how much it costs to run one per day, week, month, and a whole year.

That number is then used to multiply times the local energy price by your utility company to create your power bill.

Knowing that we can make a handy chart to estimate the cost based on the local electrical pricing. Let’s use an example from my home state of Georgia ($.057 per kWh). At 12 hours per day, our example dehumidifier would cost: 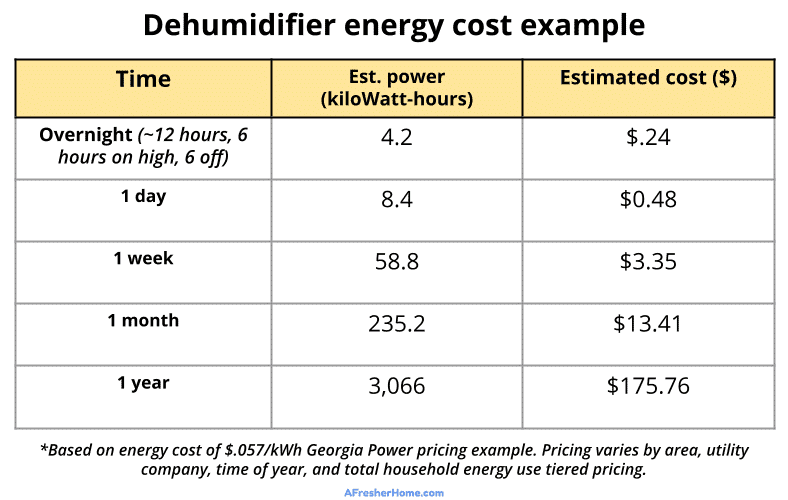 As you can see here, it’s actually fairly cheap to run a dehumidifier quite a bit! Of course, the cost will depend on where you live as some electric power rates are nearly twice as much (or more!) than what I’ve listed here for Georgia.

To be sure you don’t waste energy, you’ll want to shop for a dehumidifier with the following features:

Is it OK to leave a dehumidifier on all night? 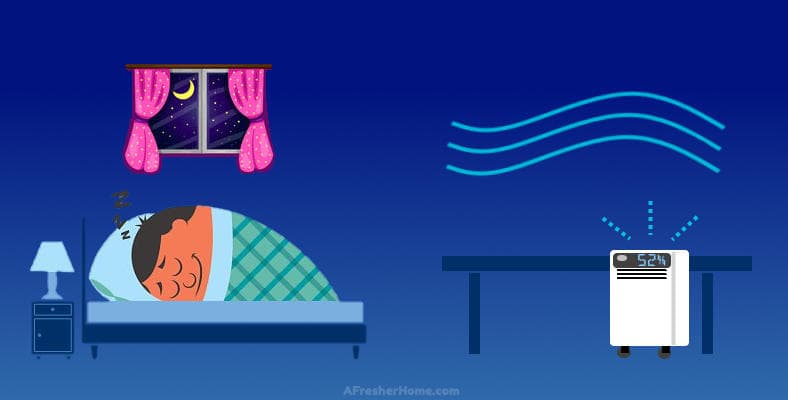 Yes, it’s ok to leave a dehumidifier running all night as long as it’s above very cool temperatures. A dehumidifier with an auto mode feature will turn off automatically once the humidity level you’ve set has been reached.

Ultimately, as I mentioned earlier, there’s no real reason can’t run yours all night long – there’s no harm in it, and it won’t cost very much money as long as it’s a model that shuts off the compressor or “high” mode once the humidity is under control. Those that don’t will cost at least twice as much to run, but that’s still not much money in most cases.

Dehumidifiers can run for extended periods of time:

Should a dehumidifier be on its own circuit? 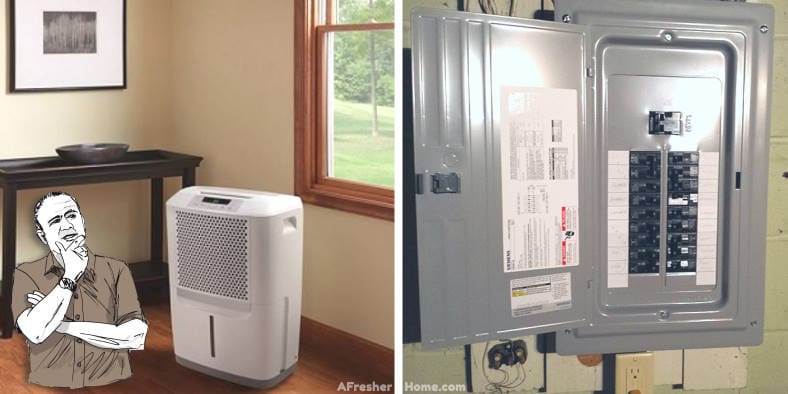 The great news is that standard household dehumidifiers do not need their own circuit – they can share a circuit powering other appliances as long as the total power draw isn’t too high. However, you do need to be aware of the total power drawn by everything plugged in to avoid tripping the breaker and shutting everything off.

For example, let’s say you have a 35 pint dehumidifier that draws about 500W when it’s running on high/fully working. Home circuit breakers/home wiring circuits are rated for about 80% of their maximum trip current, so for a 15A circuit that’s about 1,440W we can expect to have available at 120V.

Therefore, 1,440W – 500W = ~940W we have left to share with other appliances. That won’t work for using a toaster oven, air fryer, or electric heater on the same circuit. You’d need to plug those into their own circuit since they often use 1,000W+ of power).

Some things like high-power microwave ovens, for example, are right on the edge and may or may not trip the breaker when used at the same time – sometimes it doesn’t happen right away!

However, that means you’d have enough power available for most standard home electrical outlets to power your dehumidifier, electric fan, and electronics like TVs or a home stereo.

◀ PREVIOUS: What humidity should I set my dehumidifier to?
NEXT: Do I need a dehumidifier if I have an air purifier? ▶