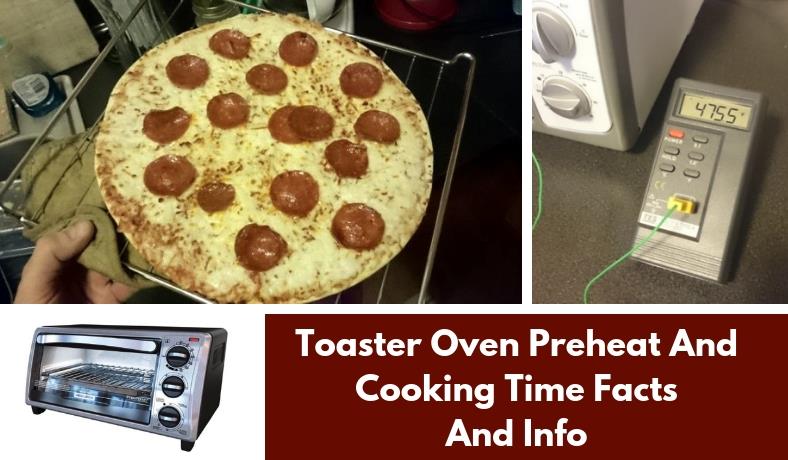 Thinking about buying a toaster oven? Or perhaps you’d just like to know more about cooking & heating times for yours.

In either case, I’ve done some hands-on testing to tell you everything you need to know about preheating times, cooking times, and more. If you’re wondering how long it takes to preheat a toaster oven, you’ve come to the right place!

Additionally, there’s some interesting information to show why they offer some great advantages over larger ovens.

Read on to learn more!

This article is part of the toaster oven main page.

How long does a toaster oven take to preheat?

The time it takes for toaster ovens to preheat varies from oven to oven based on 2 things:

Smaller ovens (like those most suited for small meals or 4 slices of bread) will perform differently than larger, multi-function toaster ovens.

To find out some hard numbers I used 2 example ovens and did hands-on testing for both. I found out some very interesting things! 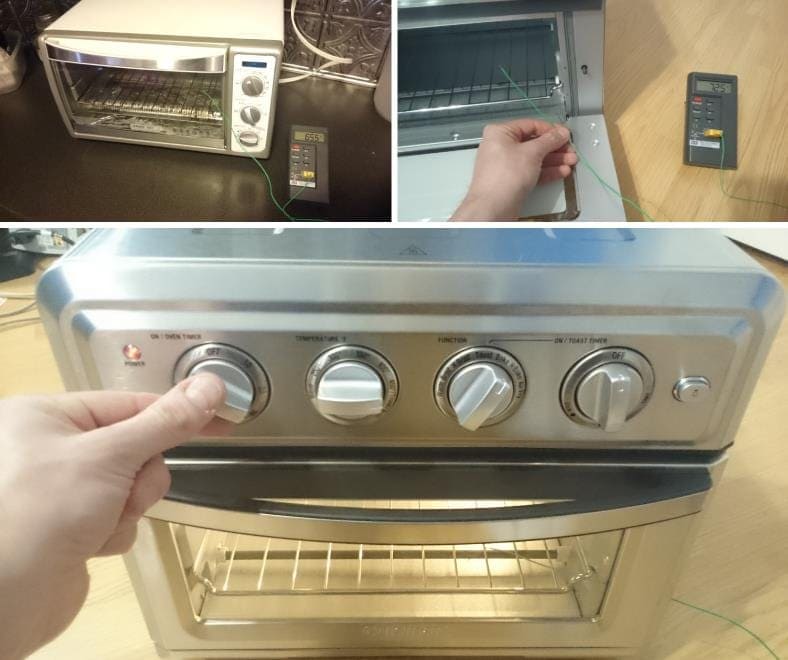 Top: For the first toaster oven I used a typical-size Black and Decker TO1675W (1500W) model. Bottom: Setting up the larger Cuisinart TOA-60 model, which is not only an oven but features an air fryer as well (1800W power). For both, I used a high-accuracy, high-temperature probe with a digital thermometer.

For my test setup, I used 2 ovens to get 2 readings and have a better understanding of how long it takes a toaster oven to warm up.

I used these models for testing:

For both, I used an accurate high-temperature probe and a digital thermometer, set the ovens to their convection bake mode, and measured the time each needed to reach 450 degrees Fahrenheit (232 degrees Celsius).

How long to preheat an oven to 450 degrees? 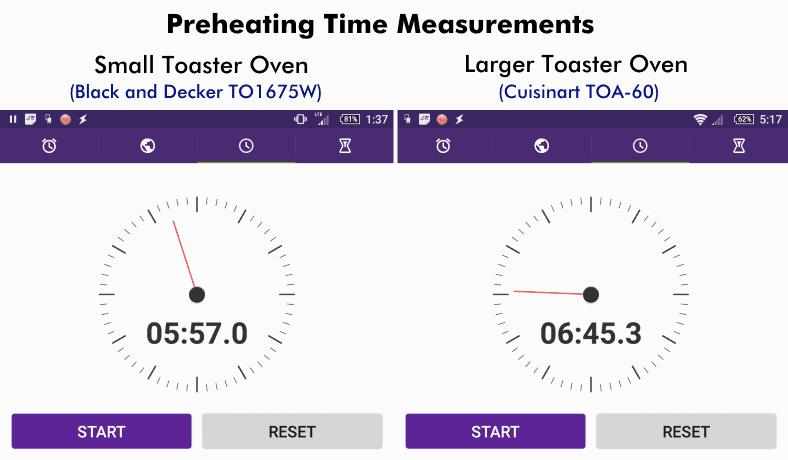 There you have it! An average toaster oven takes around 5-6 minutes to preheat to 450°F (232°C) while a larger one like the Cuisinart takes only slightly longer.

In most cases, expect a preheat time of close to 5 minutes. Smaller toaster ovens may take less time, but as a rule, 5-6 minutes is a reasonable expectation for most on the market.

What’s interesting, however, is how they compare to a larger more powerful traditional oven.

Keep reading to find out more.

Do you have to preheat a toaster oven?

Preheating a toaster oven isn’t necessary but is highly recommended.

The reason is that it gives the oven time to heat up to a ready temperature for immediate cooking when the food is put inside.

Think of it as waiting for the shower to have warm water before you get in. Is it necessary? No, but it’s definitely better in most cases as it lets you get started correctly as soon as you’re in.

It’s not just preheating times that matter when you’re considering buying or using a toaster oven. What about cooking times? How long will you have to wait for your dinner, and how well do they typically work?

In order to find out, I cooked a variety of foods in my wonderful Cuisinart TOA-60 toaster oven/air fryer. Especially important was finding out it they’re not just faster at preheating but cooking as well. 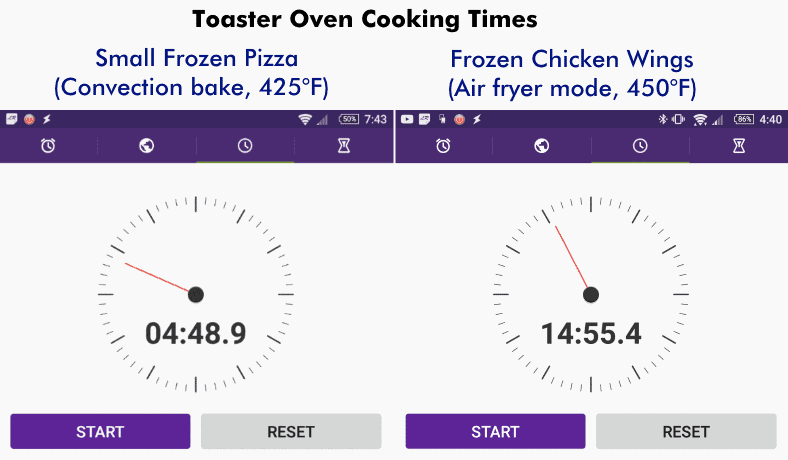 I measured the cooking times for several different foods including toast using my Cuisinart TOA-60. As it features both convection baking and an air fryer feature I put them both to the test. Here are 2 of the results I got during testing. Pretty fast, and certainly faster than a larger oven.

It’s important to clarify that I used the convection oven (baking) option in my test oven. Convection baking gives better results in many cases and is especially great for items that are tastier with an even, crunchy crust.

An air fryer also has many benefits and allows cooking great, healthy foods you love but without the oily mess and fatty health concerns normally associated with fried foods.

For my test examples, a small frozen pizza took only roughly 6 minutes to become perfectly toasted and crunchy with the recommended internal temperature of 165 degrees. (Note: for convection baking, it’s recommended to reduce the target temperature by 25 degrees before cooking). 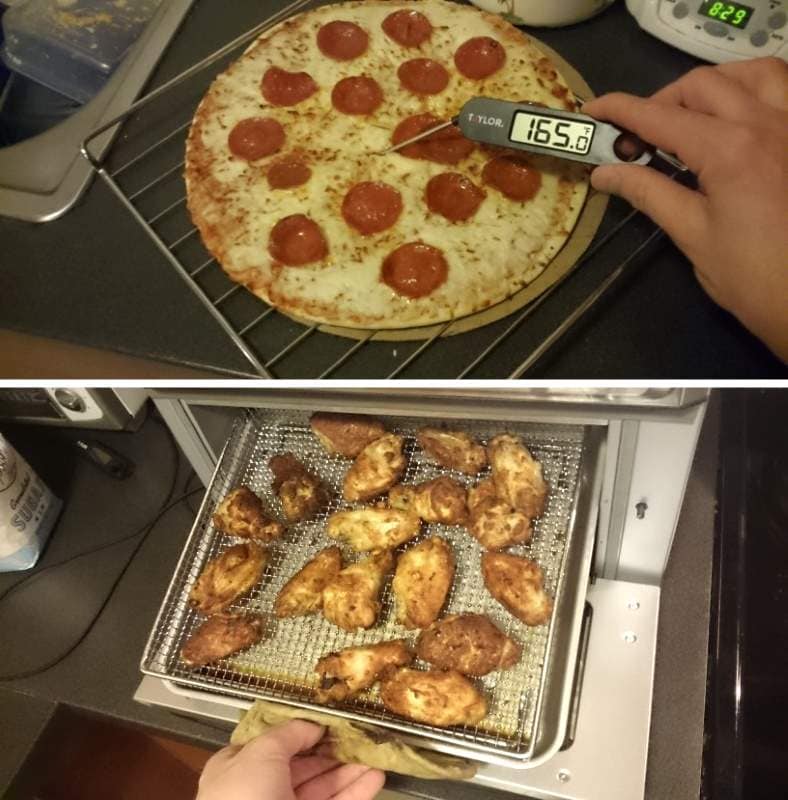 Cooking test foods and measuring cooking times. I got perfectly cooked pizza with an evenly crisped crust in about 6 minutes and delicious air-fried wings without unhealthy oil in about 15 minutes.

While the Cuisinart owner’s manual recommends about 20-25 minutes, my wings were very well done in just under 15 minutes.

Additionally, I estimate I overcooked them just a bit so it’s more like 13 minutes or so. The results were excellent, with minimal, if any, preparation.

Sure, it’s great that you only have to wait about 5 or 6 minutes or so for one to heat up. But is there an advantage over a traditional and much larger oven? And how long does one of those take to preheat?

I had to find out!

Similar to my toaster oven measurements, I measured the pre-heat time for my Samsung larger oven and here’s what I found. 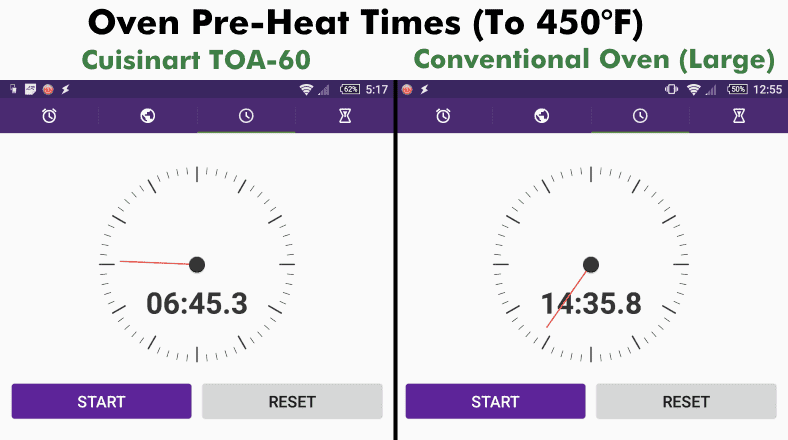 Shown: A comparison of time measured for preheating a toaster oven to 450°F (232°C) vs that of a larger, more powerful oven. Wow! Quite a difference! Just over twice as much time is needed.

What I found surprised me. While my oven is large and fairly powerful (a nice Samsung with many features) at around 3,600W, the Cuisinart toaster oven took less than half the time to preheat.

Needless to say, there’s a definite advantage here when using a toaster oven when it comes to how long you’ll have to wait before cooking a meal. That’s much less time wasted.

But wait – it gets even more interesting.

I’ve put together a simple graph that helps explain how much power one uses vs the other. 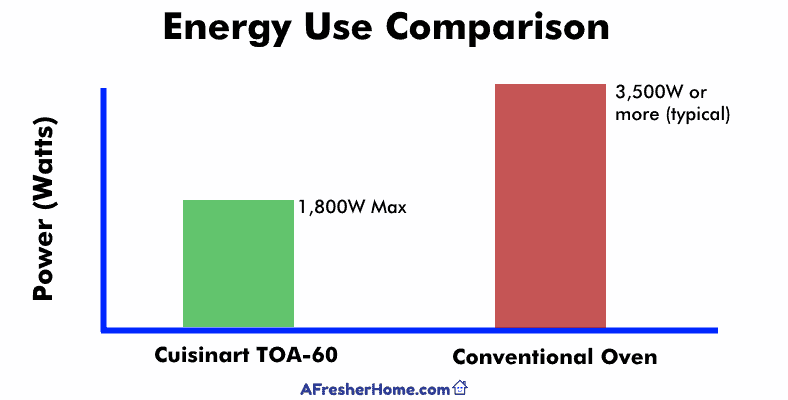 A basic graph showing the energy a good modern toaster oven uses vs that of a larger conventional (standard) oven. Basically, you can expect a regular oven to use twice or more the electrical power of a toaster oven. Over time the toaster oven will cut cooking times and energy use a lot!

Indeed, while you might think a conventional (standard) oven is larger and more powerful it’s better. The truth is, that’s not the case at all with a few exceptions.

Conventional ovens take extra time to heat the air and preheat because of the larger air volume inside.

As they’re more compact and the heating elements are normally closer to the food, toaster ovens can also cook faster in many cases despite being less powerful.

Reasons why they’re a better choice for most everyday cooking

Of course, toaster ovens aren’t ideal for everyone and all situations. For example, I often do “meal prepping” and cook large amounts of chicken or other items on baking pans which need a lot more room.

For smaller personal or family-sized meals, however, (especially frozen foods) toaster ovens are much more efficient and easier to use.

Some models like the Cuisinart TOA-60 I mentioned can even fit a whole 4lb medium-sized chicken inside for cooking.

How long does toasting bread take?

In addition to the other toaster oven measurements and tests I performed, how could I forget one of the most important?

I’ve always been a toast fan so I just had to find out how an oven compares to today’s typical inexpensive pop-up toasters found everywhere.

Toasting time measurements using 4 slices of white bread. I tested each of 3 darkness levels available on my test oven. Toasting with an oven takes slightly longer than a simple electric pop-up appliance but gives better results, I found. 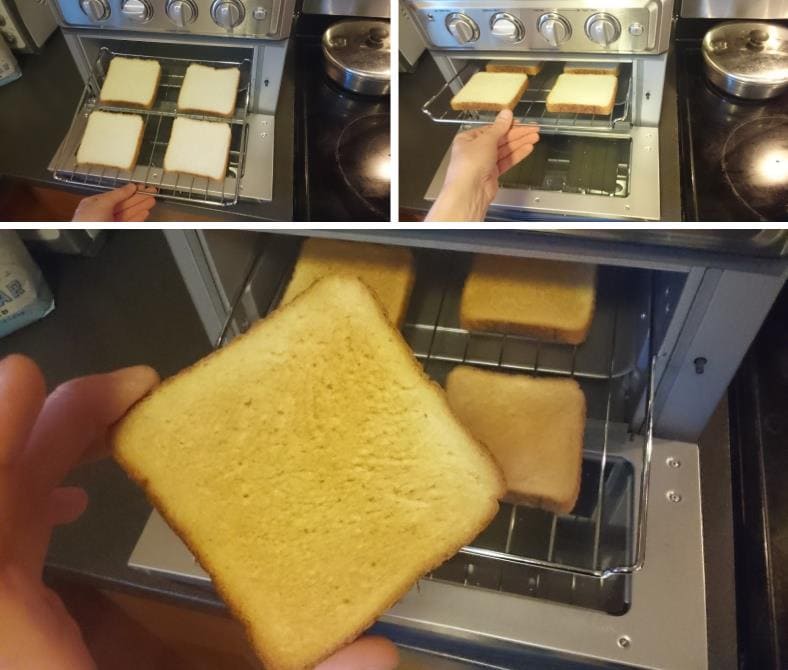 Testing white bread toasting quality & times with my Cuisinart oven. Toaster ovens are able to produce consistent, excellent toast quality (if you select a good oven, that is). Above: With the darkness selector set to Medium, I got perfectly medium-toasted bread in just under 5 minutes (with no preheating necessary).

There are pros and cons when it comes to using traditional electric pop-up toasters vs a toaster oven.

However, in my opinion, and based on my testing, toaster ovens are a better choice and you’ll be far happier with them.

While electric toasters are very simple and often very inexpensive, what I’ve found is that they’re often unreliable, fail early, and are difficult to adjust for the results you want.

Additionally, I’ve seen many cases where they would begin to perform worse over time.

By contrast, a good quality toaster can deliver consistent, nearly perfect toasting due to including features like a toast timer (which shuts the oven off after use) or toast darkness presets.

There is a trade-off, of course: a pop-up toaster can take a bit less time. The problem is that you often get uneven toasting and sometimes the toast is too dark.

The end results were excellent and it was honestly some of the best toast I’ve ever tasted in my life!

Considering the added cost of getting a better-performing electric toaster, why not just get a quality toaster oven? Many are affordable and as low as around $50, making them a better value overall. 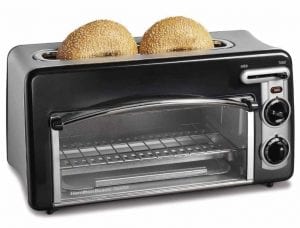 Some toaster ovens offer the same convenience as a pop-up toaster built in.

Features to look for when shopping

Most ovens sold today typically include the following features and what you should shop for mainly depends on the types of food you’ll enjoy.

Additionally, convenience is a huge factor in my opinion, too, as some models offer better options to make cooking less bothersome.

Having tested a variety of ovens and cooking modes, I can tell you that the air fryer and convection oven features are simply some of the best you’ll find.

They’re well worth spending a little more money for. Here are a few features I recommend considering when shopping. Several are available in products below $100, making them affordable for many people. 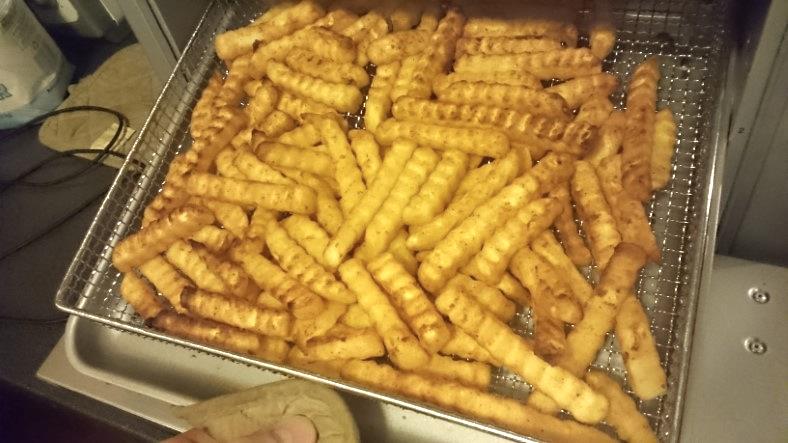 Convection ovens work by using a fan or fans to move the hot cooking air constantly. This results in an evenly crisped or toasted outside of the food as well as better heat distribution for more even internal cooking.

As convection ovens are more effective, it’s often recommended that you reduce the temperature setting by 25 degrees.